Holly Stephens
Member Since: 04/01/2022
View This Member's Profile
Hello, my name is Holly. I started to work professionally with animals when I was 17 years old. I have extensive experience with both domestic and exotic animals. I grew up in the Los Angeles area working in pet care at a local pet store, volunteering as a Husbandry Assistant at the Long Beach Aquarium of the Pacific, as well as a Keeper volunteer at the LA Zoo. I moved to San Diego to attend San Diego State University, where I earned my Bachelor's Degree in Psychology with an emphasis on behavior. During that period, I spent some time working in different kennel environments such as grooming, daycare, and of course, general care for cats and dogs. I spent one summer as a camp intern at the Birch Aquarium educating kids about our oceans and animals. I also volunteered at The San Diego Humane Society, working in Pet Therapy. I have had the honor of working in the Animal Care Department at Seaworld San Diego. It was at Seaworld that I met my husband Mark. We got married in 2011 and moved to Wildomar in 2013. Shortly after we moved, I attained my Dog Training Certification from Animal Behavior College in 2013. I completed my externship at Animal Friends of the Valley, training dogs to help them become more adoptable. In addition to my ABC Certification, I have built on my education by completing additional courses such as ABC's Pet Sitting and Dog Walking, Feline Management and Training, and The Art of Selling and Teaching Private Lessons. I am a Canine Good Citizen (CGC) evaluator with the American Kennel Club (AKC), and a professional member of The Association of Professional Dog Trainers (APDT). I recently earned a Fear Free Certification and I am a Mentor Trainer for Animal Behavior College and CATCH Canine Trainers Academy. I have a 9 year old Golden Retriever named Mia, and 1 year old Golden Retriever named Raya, and a 8 year old cat name Lilo who all like to challenge and keep me on my toes. 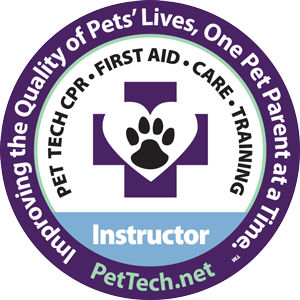